News Avionics
The Future of ELTs for Helicopters

The primary purpose of an aviation Emergency Locator Transmitter (ELT) is to locate any aircraft in distress. In Canada, the process to manage a distress call was executed 1,032 times in 2017, saving 49 lives. In 2017, roughly seven per cent of the ELT activations were real. In 2009 the international Cospas/Sarsat system abandoned monitoring beacons on 121.5 MHz, in favour of 406 MHz beacons.

Initiating the search and rescue (SAR) process occurs when one or many events occur, a flight plan is not closed, ATC or a high flyer hears a 121.5 MHz beacon, a 406 MHz beacon is seen by the satellites, or a Personal Locating Device (PLD) service provider contacts SAR. A study conducted by Defence Research and Development Canada reports that the search area of a 121.5 and 406 MHz ELT is 1,260 km and 13 km, respectively. Transport Canada reports that approximately 13,000 Canadian aircraft have legacy 121.5 MHz ELTs, but this number is decreasing slowly each year.

On May 31, 2013, a Sikorsky S-76A helicopter departed at night from the Moosonee, Ont., airport crashing less than a minute later. The Cospas/Sarsat system did not detect the helicopter’s ELT, however, as the on-board satellite tracking system recorded the departure and then went inactive. This prompted a search and rescue event, with SAR personnel finding the aircraft roughly five hours after the crash.

One of the TSB’s recommendations to Transport Canada was “the Department of Transport require all Canadian-registered and foreign aircraft operating in Canada, that require the installation of an emergency locator transmitter (ELT), to be equipped with a 406 MHz ELT in accordance with International Civil Aviation Organization standards (TSB A16-01).”

Transport Canada Push
In November 2020, Transport Canada amended the CARs (605.38) mandating that 406 MHz ELTs  be installed in all aircraft operating in Canadian airspace. The amendments apply to Canadian and foreign-registered aircraft operated in Canada, with a few exceptions. Transport states the new, strengthened requirements will: Improve passenger safety by increasing the likelihood that the distress signals will be received; Enhance the efficiency of SAR operations by providing rapid and accurate position information; Reduce false alarms and the unnecessary deployment of search and rescue resources; Harmonize emergency locator transmitter requirements with international standards; and Respond to the TSB recommendation.

This set of strengthened measures requires Canadian commercial and business aviation to have one or more fixed ELT’s which transmits simultaneously on 406 MHz and 121.5 MHz installed no later than November 25, 2021 and all other in scope aircraft no later than November 25, 2025. 406 ELTs must be registered with the Canadian Beacon Registry (CBR). There are a number of exemptions: gliders; balloons; airships; ultra-light aeroplanes; gyroplanes; flight school aircraft do not require an ELT if their aircraft operate within 25 nm of the departure aerodrome; and skydiving operations when conducting parachute activities within 25 nm of the departure aerodrome.

There are a number of other exceptions, typically focusing on flight testing and new aircraft. Foreign registered aircraft operating in Canadian airspace must have either a 406 MHz ELT or portable 406 MHz beacon onboard by November 25, 2021. Penalties for non-compliance range from $1,000 to $15,000.

Options include a remote activation switch (typically installed in the cockpit), portable ELT antenna, internal GPS, combination GPS/ELT antenna, and external GPS integration. Some ELTs with portable antennas are designed to be removed from the aircraft, activated and used as a survival ELT.

Most 406 ELTs either have an onboard GPS receiver or can be hardwired into an existing panel mounted GPS navigator. ELTs without GPS will deliver location accuracy to three kilometres within three hours, while a 406 MHz ELT with GPS will deliver 100 metre accuracy within one minute. 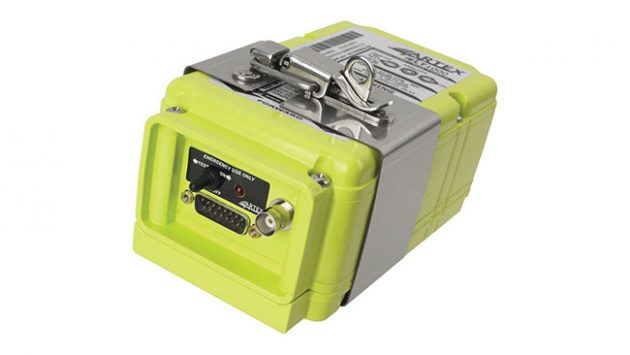 One of the newest ELTs from Artex, which provides Web-based tranining.

Costs, tests and satellites
The Cospas/Sarsat system has three types of satellites (low, medium and high earth orbit), all receiving  406 MHz ELT signals.   The new MEOSAR satellites will receive a 406 data burst and within minutes have a location fix to within 100 metres. The Cospas/Sarsat system has many layers of redundancy. If a mountain or bluff is blocking your view to the GEOs, then the MEOs and LEOs still have you covered. If a LEO isn’t directly overhead, the GEOs and MEOs have you covered.

Manufactures like Artex, Kannad, ACK Technologies, Pointer, and Emergency Beacon Corp, produce 406 ELTs built to support the Canadian technical service orders. Artex have  a number of ELTs designed specifically for helicopters (any model with a HM postfix). Marc Medeiros, Vice President, Artex reports, “Helicopters are normally equipped with higher specification rod antennas, which can increase the cost of installations when compared to GA fixed wing aircraft that can be equipped with low-cost whip antennas.”

Further, helicopter ELTs differ from fixed wing ELTs in that they have a 5 axis G-switch, in addition to the single axis G-switch.

Helicopter 406 ELTs costs start at $3,500 (plus taxes and shipping) with installation taking a few hours (or more) of shop time depending upon the options and installation complexity.  For an average helicopter, a budget of $4,500 (plus taxes) would be a good start. Typical 406 ELT batteries require replacement every five years (versus two years on legacy 121.5 ELT batteries), which may vary based upon manufacturer.

Typical cost of battery replacement and testing is roughly $500, depending upon the manufacturer and the avionics shop.  Interestingly, Artex will replace your Artex ELT if you ever use it in an emergency.

Effective August 1, 2019, testing requirements changed, requiring a performance test every two years and an operational test every 12 months. Two-year performance testing must be conducted by an avionics shop that has the proper ELT testing equipment. The annual operations test can be completed by the pilot/owner. During the first five minutes of any hour, press the ELT’s activation switch for no more than five seconds.

If your ELT is registered with the CBR, you will receive an email documenting the test. Don’t forget to place the test results into your technical logs and journey logbook. If you inadvertently activate your ELT, contact SAR or ATC as soon as possible.

Artex has Web-based testing tools, which allows avionics shops to test and record Artex ELTs (www.406Test.com) and a pilot/owner tool (www.406Link.com). The Transport Safety Board reports that they have found at crash sites, ELTs which were not properly installed. Adding a review of the ELT’s installation and an ELT test during the annual inspection would ensure that this valuable lifesaving technology is working properly.

Beacons and SAR
Personal Locating Beacons (PLBs) utilize 121.5/406 MHz frequencies to communicate with the Cospas/Sarsat system and are registered with the CBR.  PLBs are easily attached to your flight suite or belt, and remains off until required to summon SAR. As with an ELT, the on-board battery has a specific lifespan and must be replaced, typically every seven years.

The Artex PLB is about the size of a hockey puck, has an onboard GPS, 121.5/406 beacons, high intensity LED strobe light, waterproof to 15 meters and will operate for more than 24 hours when activated. This is a great “belts and suspenders” approach. Retail price is $406 (plus tax and shipping).

Beacon information held in the CBR is maintained by the National Search and Rescue Secretariat. Online access to the registry allows owners to register new beacons or update their information. You can add or update your information on-line, mailing or faxing a completed registration form or calling the CBR. The registration information must be updated annually or when the aircraft ownership changes.

Flight is an activity which balances risk, expertise, weather and hardware to deliver a successful flight. Affordable technology allows a well equipped helicopter and pilot to turn a SAR event into a positive outcome.  Understanding the technology and ensuring that your ELT is properly installed and tested, backed up by secondary technology is not only good airmanship but fulfills the pilot’s responsibility to passengers, crew and their families.