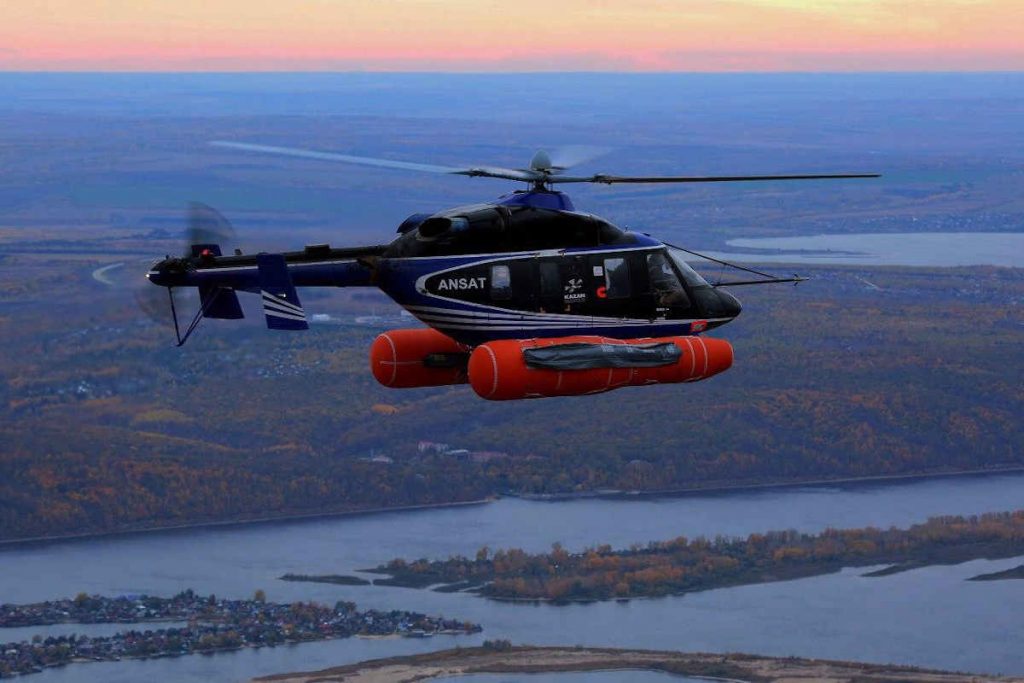 Ansat helicopters equipped with the Emergency Floatation System will be capable of flights at a considerable distance from the coast, as well as of participation in search and rescue operations. (Photo: Russian Helicopters)

The program included assessment of the helicopter performance with packed and filled ballonets, which are made of an elastic material ensuring flotation of the rotorcraft. The time necessary for filling the ballonets during the flight was also measured. During the tests on the ground, the activation of life rafts and the possibility of evacuating passengers and the crew through emergency exits were assessed.

“Kazan Helicopters received an opinion on flotation and resilience of Ansat helicopter with the sea state code 4 [moderate waves, according to the World Meteorological Organization, after simulation tests of the Central Aerohydrodynamic Institute named after N.E. Zhukovsky in a basin and in the open sea,” said Yuri Pustovgarov, managing director of Kazan. “I would like to emphasize that due to this system, Ansat helicopter provides for safe evacuation of passengers and the crew to life rafts in case of ditching.”

Additionally, Ansat has received certification of the reduction in airworthiness limitations of its main parts, such as the main rotor hub, the antitorque rotor, and the empennage. Ansat is a light multipurpose twin-engine helicopter, serial production of which is deployed at Kazan Helicopters.

According to its helicopter certificate, the Ansat design allows for converting the helicopter into a cargo version or into a passenger rotorcraft that can lift up to seven people. In May 2015, a supplement to the type certificate for the modification of the helicopter with a medical module was obtained. Ansat is certified for use in the temperatures ranging between -45°С and +50°С, and at high altitudes.

In mid-February, Russian Helicopters also received the type certificate of its Ansat light multipurpose helicopter for use in the People’s Republic of China. This validation by Chinese aviation authorities allows Rostec to start supplying Ansat helicopters to China under a previously awarded contract.